After the YouTube app on iOS, now YouTube for Android has gained support for 4K HDR playback. The new YouTube app will now allow Android users to watch videos in 4K HDR for the supported videos. Just to tell you that until now, people using YouTube Android app could only watch videos at a maximum 1440p resolution. The latest update now brings the support for watching YouTube videos in 4K HDR on Android even if you don’t have a 4K display.

With the latest update bringing 4K HDR support for the YouTube app on Android, users will now see an additional option in video quality — 2160p (4K) HDR. Earlier, users could only see resolution options for up to 1440p at the maximum, even if their display supported higher resolutions and the video was 4K. But now it’s changed, and you can watch YouTube videos on Android in 4K HDR. The feature has already started rolling out for some devices, all you need to do is just update your YouTube app to the latest version.

How to Watch YouTube Videos in 4K HDR on Android 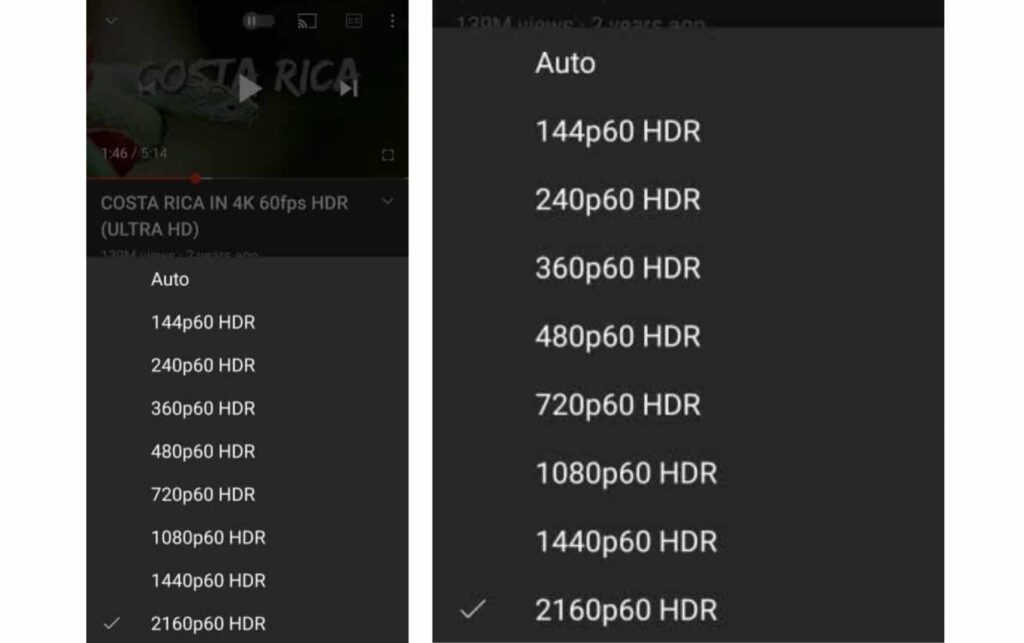 The new update that brings 4K HDR streaming support to the YouTube Android app is rolling out, says Android Police. To check if you’ve got the 4K HDR playback support on your YouTube app and watch videos in 4K, follow these steps.

1. Open the YouTube app on your Android phone and go to any video that’s uploaded in 4K.

2. Now click on the three-dot menu icon at the top-right corner of the player.

3. Next, tap on “Quality,” and you should be able to see 2160p60 HDR among other resolution options.

YouTube had been bringing a slew of updates to enhance the user experience of both creators and viewers. Recently, the company has announced that it’ll roll out the YouTube Shorts feature in the US starting March. This feature debuted in India back in September 2020.