Back in October, Samsung launched its Galaxy F series smartphone, the Galaxy F41, in India. But now, the South Korean company is expected to launch its second phone from this series — the Galaxy F62. Recently, the upcoming Galaxy smartphone has appeared in the Geekbench ahead of its launch in India.

The listing with model number SM-E625F reveals key specifications, including the processor and RAM. In the Geekbench test, the smartphone has scored 763 points in the single-core and 1952 in the multi-core test. Here’s what the Galaxy F62 will offer.

The Geekbench listing of the Samsung Galaxy F62 reveals key specs of the upcoming smartphone from the Galaxy F series. Under the hood, the device will feature Samsung’s own Exynos 9825 chipset paired with 6GB RAM and 128GB built-in storage. The handset will sport a 6.4-inch FHD+ Super AMOLED display and will run Android 11 OS with OneUI 2.5 on top. At the rear, there will be a fingerprint scanner for security.

Speaking of optics, the Galaxy F62 will come with a triple rear-camera setup with a 64-megapixel primary sensor. The other two lenses include an 8-megapixel ultra-wide lens and a 5-megapixel live-focus sensor. At the front, there is a 32-megapixel snapper for taking selfies and video calling. Apart from this, the smartphone will pack a big 6,000mAh battery with support for 15W fast charging. Additionally, the connectivity features include 4G LTE, Bluetooth 5.0, dual-band Wi-Fi, GPS, and USB Type-C port for data transfer and charging. 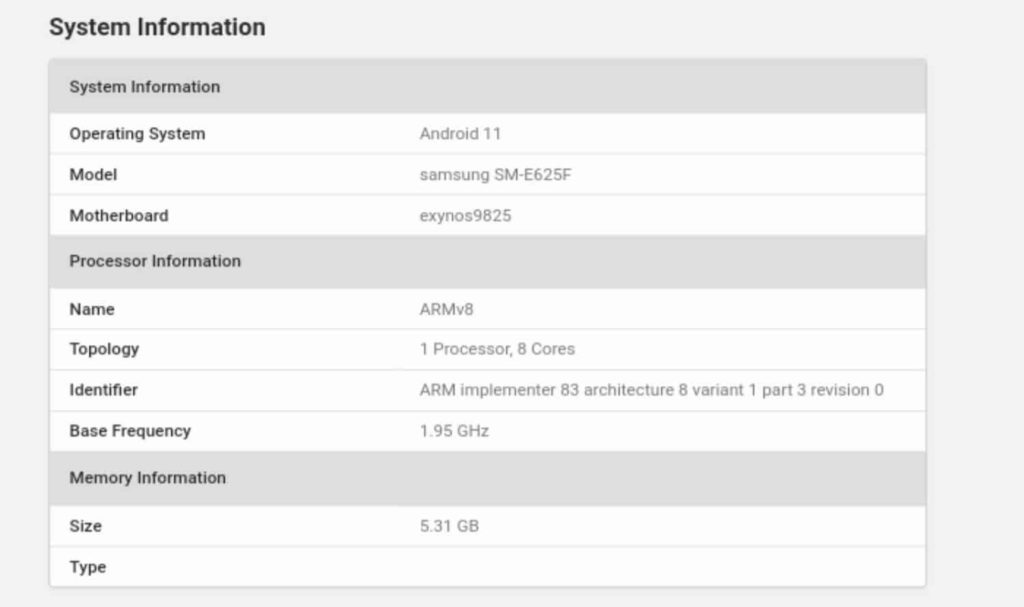 The specifications of Galaxy F62 are expected to be more powerful than the other smartphone from the Galaxy F series. This means that the device will also carry a higher price tag as compared to the Galaxy F41. We expect the device to launch in India soon.