Ever had a greedy app that you wished to hide? There are many reasons to hide apps on your Android device. The apps may contain some personal stuff, and you’re sharing the device with another person, or you don’t want your kids to use that app.

Whatever your reasons are, we got some methods to hide any apps on your Android device. So let’s see them now.

The latest version of Android still lacks peculiar features, such as hiding apps. However, you can easily hide apps on Android Phones with the help of third-party apps such as Launcher applications.

How to Hide Apps on Android?

There are many ways to hide an app on Android. You can use any third-party apps that claim to hide your app. But most of these apps are free but contain ads. Premium apps can get you the features without ad, but there are other ways to do so.

Method 1: Use your Default Launcher

Some Android smartphones from certain manufacturers like Samsung or Mi come with custom launchers. These launchers are very feature-rich, and hiding apps will be one of them. So if you have a phone that comes with such launchers, you can use it to hide your app.

For instance, here, we use a Samsung Device that comes with One UI that provides the option to hide any app. 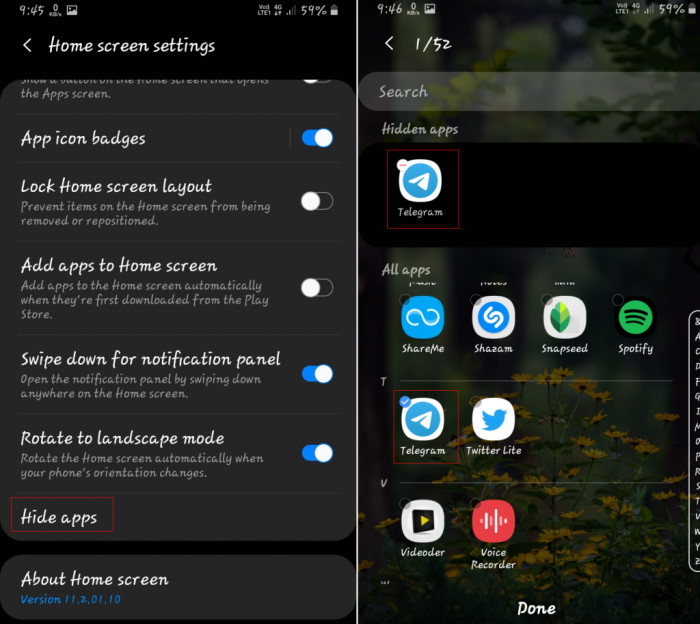 Launch the App drawer and Tap on the three dots in the top right corner.

Scroll down to the end and tap on the “Hide apps” option, and tap to select the app you wish to hide.

Now, this method is for the One UI launcher. The steps are similar for any other launchers (or Android skins). For instance, in Mi, you should be able to hide or lock apps from Settings > App lock by selecting the app you wish to hide.

Method 2: Use a Third-party launcher

Although you’re a stock or near-to-stock android user, your manufacturer won’t give such features on your launcher. It is because the launcher will be too minimal and simple.

For instance, if you’re a Moto or a Nokia user that comes with vanilla Android, then you should follow this method in order to hide apps.

Also read: How to Tell If Someone Blocked You on Facebook

First, download a third-party launcher that comes with an app lock/hide feature. For example, let’s use Microsoft Launcher, but you can choose other launchers like Nova or any other ones of your choice. Get Microsoft Launcher.

Open the Microsoft Launcher App drawer, tap on the three dots on the top right corner, and tap on Hidden apps. 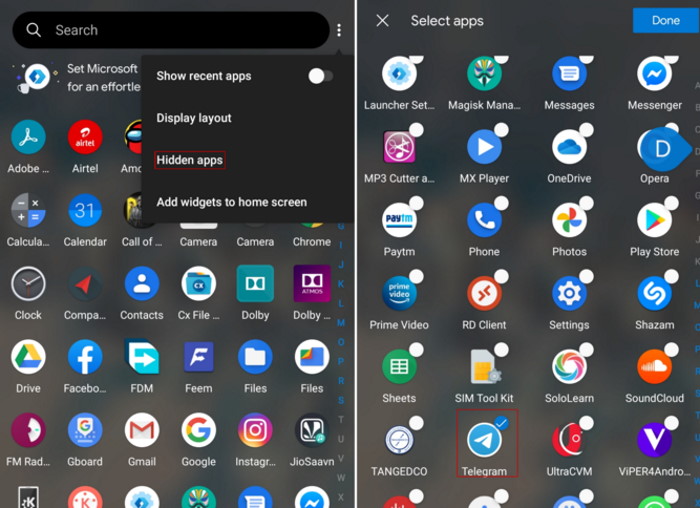 Now, there will be no hidden apps, but you can add them by tapping on “Hide apps.”

Finally, select the apps you wish to hide and tap on “Done.”

This will hide the app from your Launcher App drawer. You can tap on the Hidden apps option and use your Hidden apps.

It is a must to set this Launcher as default else one can easily access your hidden apps from the pre-installed launcher. You can also set password protection to hidden apps by selecting the Gear icon (settings icon) on the right corner.

The procedure will be similar to any third-party app launcher in the market. You can find these options either in Launcher settings or the app drawer for the launcher.

App Hider is a controlled privacy application for users like you and me. It provides some basic privacy-related services such as photo hiding, app hiding, etc. The best thing about using the App Hider is that you don’t have to install a new launcher to hide apps on Android devices. You can do it easily using third party apps.

Open the app, and give all necessary permissions.

The app will look like a launcher. Now from the app, tap on the “Plus” icon. 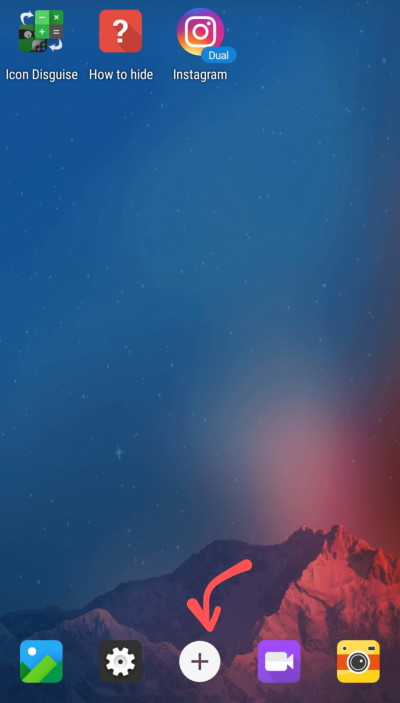 Now tap on import (Hide/Dual). And let it import into your app. 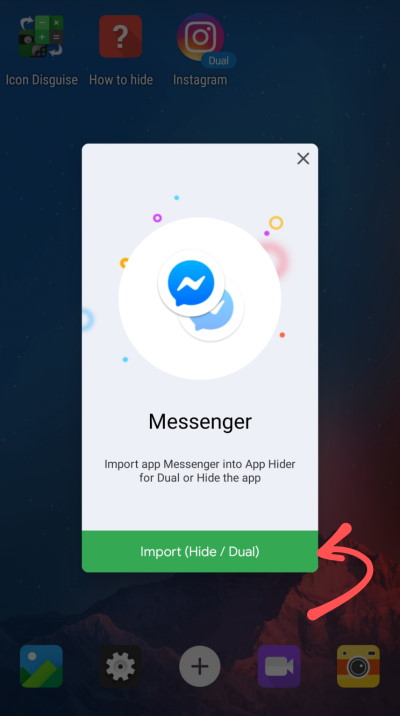 Once imported, tap on the app and tap on Launch dual, and check it. The app works in this environment.

If it works (Read NOTE below), it’s time you uninstall the app from your main launcher, yet you can open the app from App Hider.

If the app works and you’ve uninstalled from the main launcher, you can also disguise this app into a calculator icon. For that, tap on App disguise and tap set up a PIN. Remember this six-digit PIN, which will be used to unlock this App Hider app from the disguised calculator app. 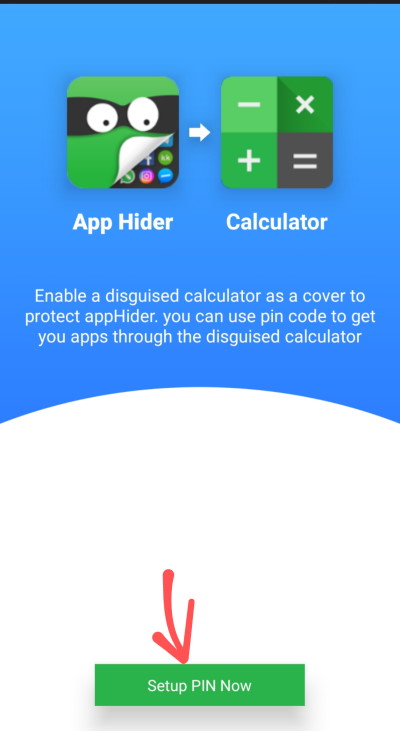 NOTE: This will remove data from your original app. Although your app supports backing up (ex. WhatsApp’s Gdrive backup), it’s good to take a backup before attempting. The app contains many ads. Check for the paid version if that is suitable for you.

What if you can hide all your secrets inside the Calculator? It seems very peculiar, but there are hiding apps that can mimic system apps such as Calculator or Currency Convertor. But these apps can hold much private information, including hidden apps on Android.

By far, it is one of the most secure types of app hiding on Android. Most people will ignore the Calculator application, where all your hidden apps are there. So you can keep your device safe and tidy at the same time.

The additional feature in this app over the App Hider is that it can also hide photos and videos, including documents.

There are plenty of problems when it comes to hiding apps. The most irritating one is not be able to use those hidden apps easily. You generally have to un-hide those apps to use them.

However, most people want to use the hidden applications on a daily basis. So here is the Applock that can protect or hide your apps easily.

Applock puts a biometric, pattern, or number lock in front of your apps so that other users cannot open the app without your permission. It does not hide the app but keeps it out of reach from others.

Open the Applock app and Set up a lock method at the first launch. 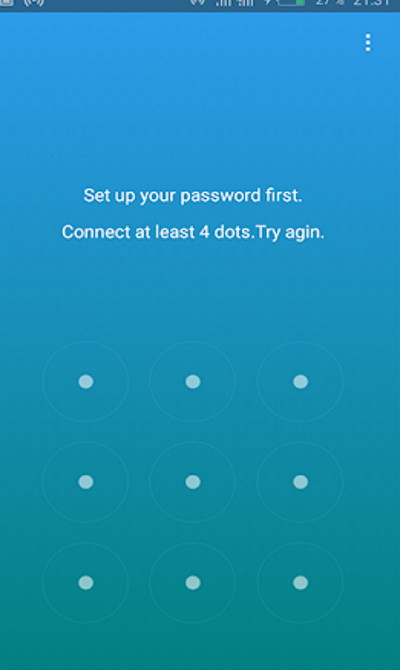 From the next menu, select the app which you wish to lock. 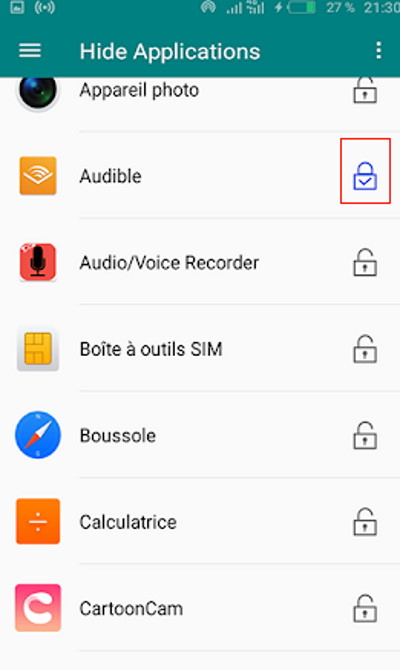 That’s it. Next time you wish to open the app, the app would ask your pattern to unlock.

Apart from locking, it also supports intruder selfie and sound alarm features that can show you others who try to access your app without permission.

So to conclude, these are the best solutions to hide an app in an Android device. You can also use a third-party app to hide an app. But it’s not recommended as the procedure is complex, and those apps are full of ads. However, they can be used to create clone apps (dual apps). So if you want such features along with app hiding, please check their paid versions.