It looks like Vivo will soon launch its new smartphone — the Vivo V20 (2021) — as the device allegedly appears in a Geekbench listing. This upcoming Vivo phone has been spotted on Geekbench with model number vivo V2040, revealing some key possible specifications.

The Geekbench benchmarking platform has listed the alleged Vivo V20 (2021) smartphone with 8GB of RAM. Further, it will be powered by Qualcomm Snapdragon 675 SoC and run the latest Android 11 OS out of the box. In Geekbench 5’s single-core and multi-core tests, the device scored 553 and 1765 points, respectively. However, there is no official announcement from Vivo about when the refreshed version of V20 will launch.

Earlier, the Vivo V20 (2021) had also appeared on the Indonesia Telecom website with the same model number, ie. V2040 as well as the BIS website. The Bureau of Indian Standards (BIS) listing suggested that the upcoming Vivo phone could launch in the country soon. Since this handset is believed to be an upgraded version of the Vivo V20, most specs could be the same for both devices. To recall, here’s what the Vivo V20 offers.

The Vivo V20 smartphone launched in India back in October this year with a 6.44-inch full HD+ AMOLED display. The handset comes with a 2.2GHz Snapdragon 720G chipset paired with up to 8GB of RAM and 256GB of internal storage. However, the Geekbench listing for Vivo V20 (2021) suggests a Snapdragon 675 processor, though the RAM size remains the same. We expect the upcoming handset to come with multiple storage options too. Note that there is also a 5G variant for V20 — the Vivo V20 5G. 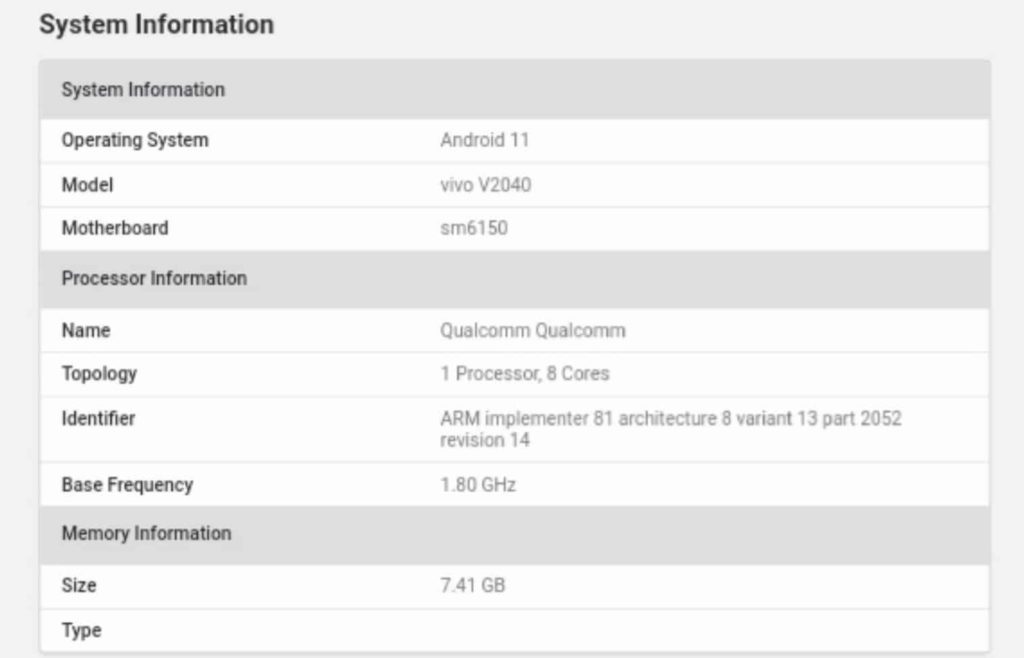 Speaking of the optics in Vivo V20, it carries a triple rear camera setup with a 64MP primary sensor. The other two cameras include an 8MP secondary sensor and a 2MP monochrome sensor. Like most phones, it packs a 4,000mAh battery with support for 33W fast charging.

As of now, there is not much information on the upcoming Vivo V20 (2021) handset, but, we expect to hear more on it in the coming day and weeks.