Redmi 9 Prime is Going to Launch in India on 4th August. Will be Sold Exclusively via Amazon and Mi.com.

Redmi is launching budget-oriented smartphones one after another and the Redmi 9 Prime is the newest one. The Redmi 9 Prime is a budget smartphone that will target audience below Redmi’s Note series of phones. Thus, pricing can be expected to be lower than ₹ 11,999. Given Xiaomi’s inclusion of the following in Amazon’s Prime Day Launches, we can expect it to go on sale during the 2 day Amazon Prime Day event. The company hasn’t shared much about the phone and its specifications, but we do have a brief idea about it which we put together here.

The Redmi 9 Prime will be launched via an online live stream, starting 12 noon on 4th August 2020. Like always, we expect it to be streamed via Youtube, mi.com, Amazon.in, etc. The Redmi 9 Prime will be sold in India via Amazon, mi.com, Mi retailers, and Mi Home outlets. Pricing, though not officially revealed, would be less than ₹ 11,999. We expect the phone to be priced starting ₹ 9,999 for the base variant. Manu Kumar Jain, Xiaomi’s India head also tweeted about the phone as you can see below: 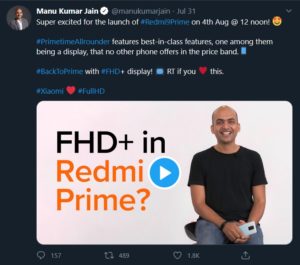 Xiaomi hasn’t revealed much about the Redmi 9 Prime, but here is what we expect it to come with. Considering their track record, Xiaomi is known to rebrand most of their phones worldwide. Similarly, rumors suggest the Redmi 9 Prime be a rebrand of the global Redmi 9 which came in June. Xiaomi India head, Manu Kumar Jain revealed via Twitter, the one specification which is confirmed as of now – a Full HD+ display. This is similar to the Redmi 9 global variant, so we expect the rest to be similar amongst both devices too.

If Redmi 9 Prime is indeed the Redmi 9 global, other specifications would include a MediaTek Helio G80 processor, and up to 4GB RAM and 64GB storage. The phone would likely be having a 6.53-inch display and a 5020 mAh battery, along with a USB Type-C port for charging. We doubt Xiaomi to bundle an 18W fast charger in the box, but the phone should have support for it.

There would be a quad-camera setup to the back with a 13-megapixel primary shooter, a 5-megapixel macro camera, an 8-megapixel ultrawide, as well as a depth sensor. To the front, we can see an 8-MP shooter. We will likely be seeing Xiaomi retain the IR blaster, 3.5mm headphone jack, and a rear-mounted fingerprint scanner.