Motorola is all set to launch its first Snapdragon 800 series-powered smartphone, the Motorola Edge S, in China on January 26. The company announced this development on China’s social networking site Weibo today. According to the company, the upcoming smartphone will sport the latest Qualcomm chipset — the Snapdragon 870 SoC — that the chipmaker announced just yesterday. This new chipset is built on the 7nm process and has a clock speed of 3.2GHz, faster than the Snapdragon 865 and 865 Plus.

The smartphone brand took to its Weibo account to confirm that its latest handset will launch in the country on January 26. As per the Weibo post, the launch event will begin at 7:30 PM local time (at 5.00 PM IST). The event will be live-streamed on the company’s official website and its social media accounts. However, the company didn’t reveal anything about the phone’s design in its poster. Also, there is currently no clarity on whether the Motorola Edge S will launch in markets outside China or not. 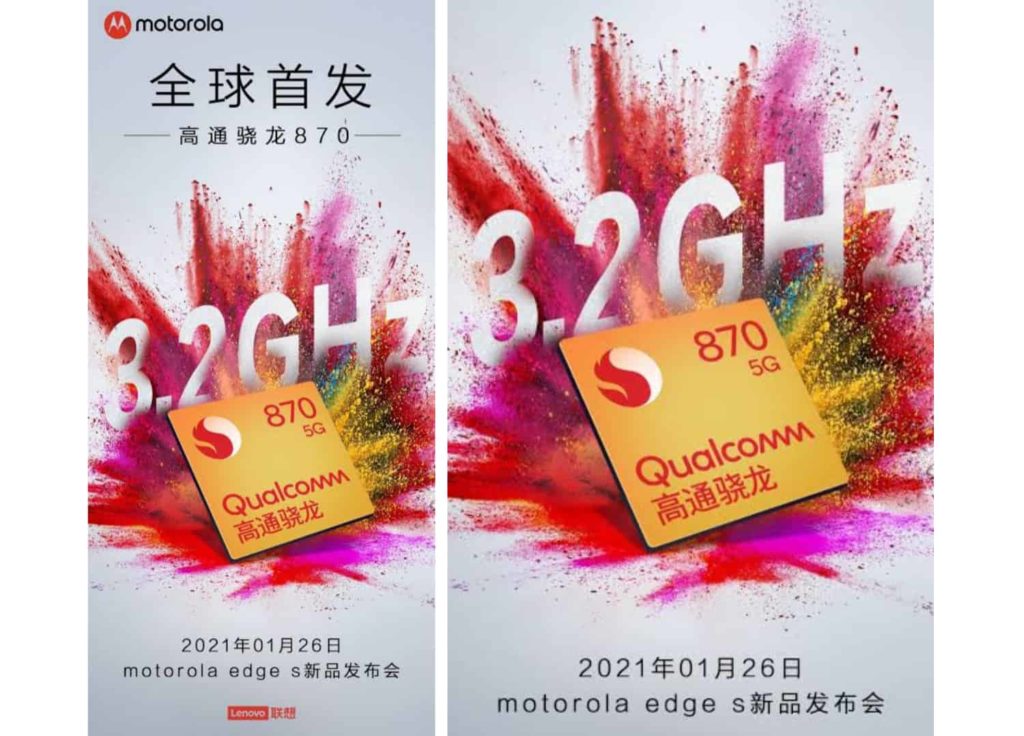 As said before, the Motorola Edge S will be powered by the Snapdragon 870 SoC, and the company has confirmed it through the poster it shared on Weibo. Qualcomm announced this new Snapdragon 800 series chipset hours ago, and it said that the 870 processor is a follow-up to its Snapdragon 865 and 865+ SoCs. It has a peak clock speed of 3.2GHz and is built on the 7nm processor architecture. Further, the processor features the Adreno 650 GPU and supports Wi-Fi 6, Bluetooth v5.2, and USB Type-C Gen 3.1. In fact, Qualcomm has confirmed that besides Motorola, other OEMs who will use the new SoC include Xiaomi, OPPO, OnePlus, and iQoo.

Apart from the processor, past leaks suggest that the upcoming Motorola phone will internally be called ‘Nio’. If that’s true, then this smartphone is likely to feature a quad rear camera setup with a 64MP primary sensor. At the front, past leaks claim that there will be two hole-punch cutouts on the screen for dual selfie cameras. However, the design details of the Motorola Edge S remain a mystery. We are now just a few days away from the launch, and we will get all the details of this handset on January 26 during the launch event.